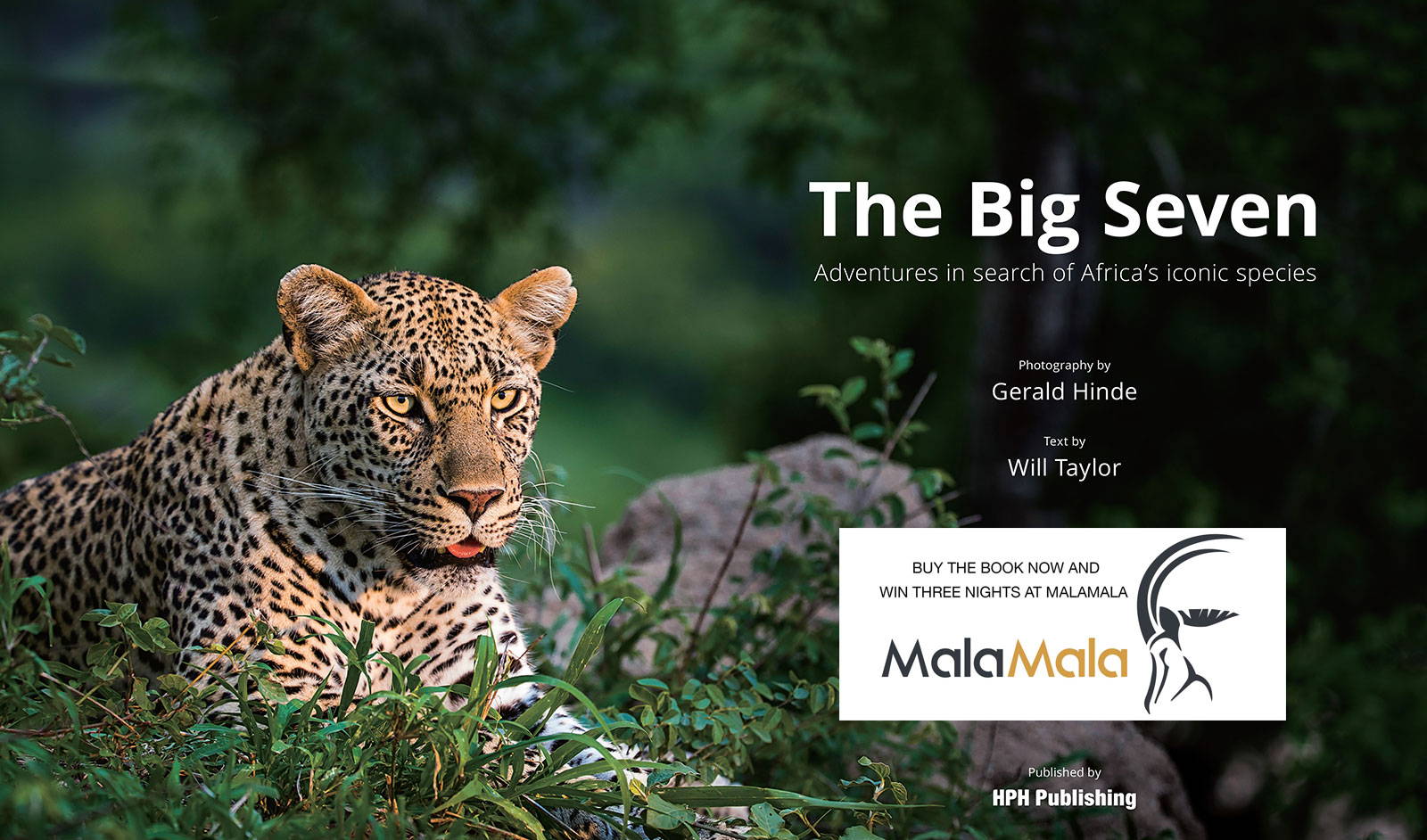 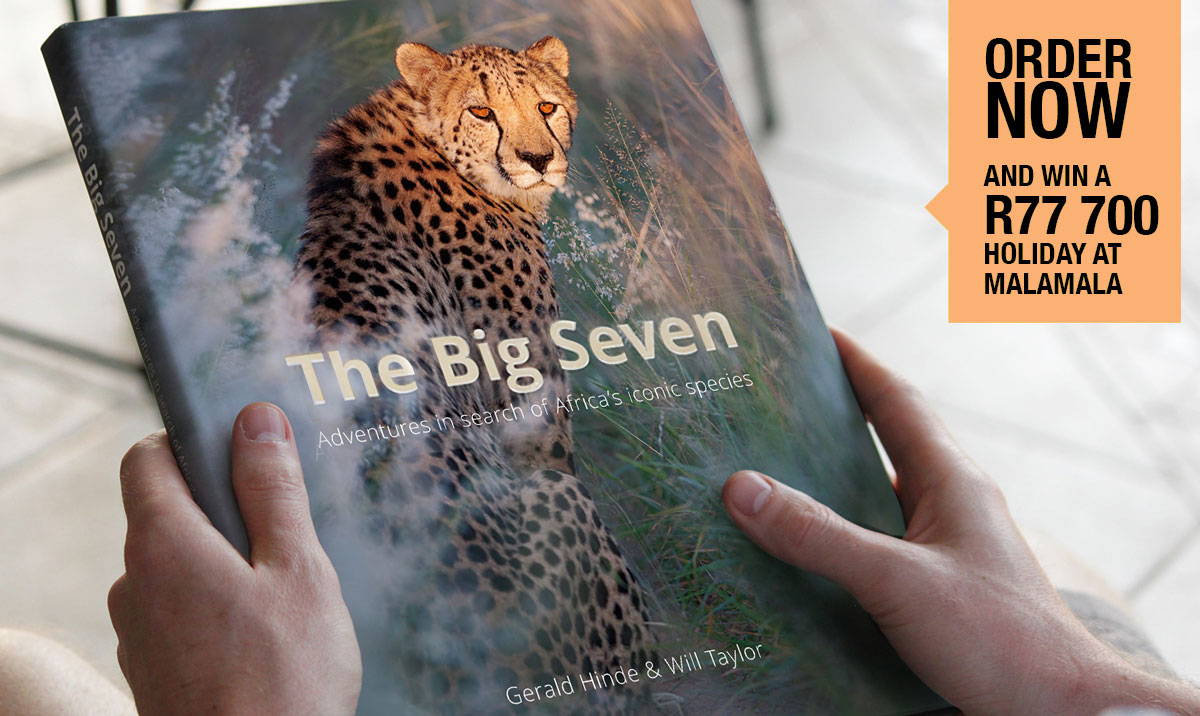 “A low deep throated growl was the only warning we got before a huge tawny shape separated itself from a low bush and came rocketing towards us in a bewildering maelstrom of thudding paws, flying dust and almost impossibly loud roars and grunts.”

It’s experiences like this one, where Gerald Hinde and Will Taylor found themselves staring down a golden-coated death, that make their tales of decades together following leopards, chasing rare bird sightings, and narrowly escaping incident so engaging. Their unique story is intriguing, and has been turned into this highly-anticipated sequel to Africa's Big Five, and acclaimed Discovery Channel film Royal Blood.

MalaMala has offered a prize of three nights' accommodation for two people in a twin luxury room at MalaMala camp worth R77 700. Anyone who ordered a Big Seven as a separate book, or in a bundle with other books before 20 December 2018, stood a chance to win this prize. The draw has taken place, and the winner been notified - Congratulations Cliff Robertson! 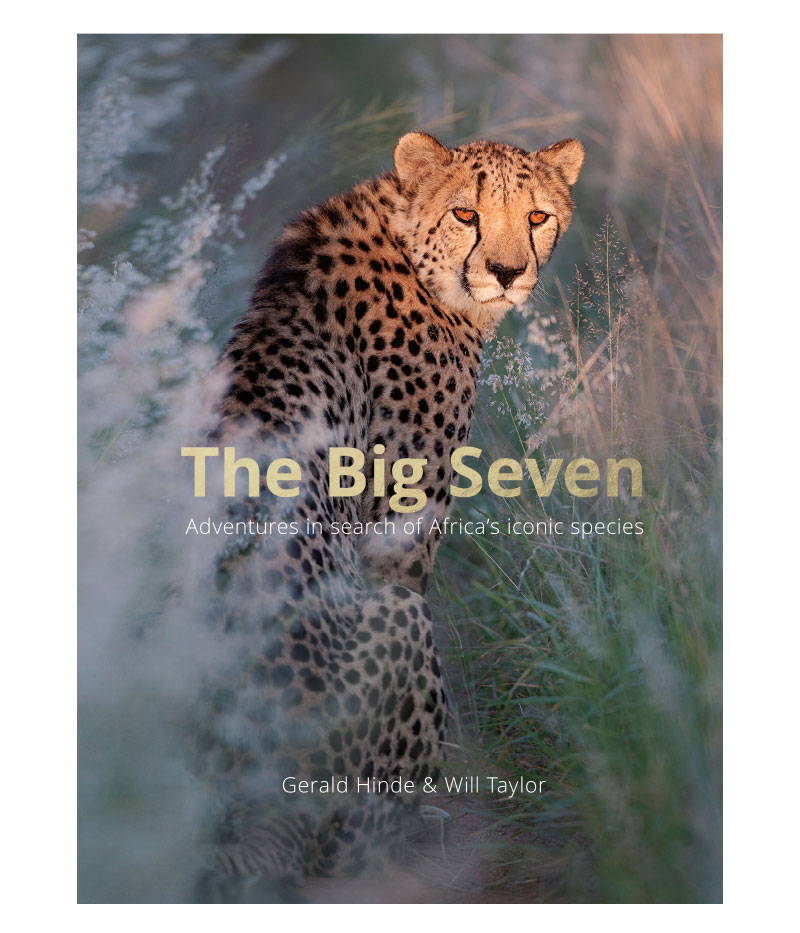 The Big Seven are the most exciting, charismatic and, in some cases, dangerous, of Africa’s big game species. This book covers the lives of these animals and the authors’ adventures in both words and photographs to bring the experience of tracking down the Big Seven to life. Filled with magnificent imagery and evocative text, The Big Seven is an exciting adventure from start to finish.

Gerald Hinde and Will Taylor have spent over 30 years recording African animals, people and landscapes in both moving and still imagery. Over this time, it became clear that they were particularly drawn to a specific group of the most intriguing, exciting, dangerous and rare animals they had photographed.

The classification of lion, leopard, rhino, buffalo and elephant as the Big Five has always had associations with a hunter’s world. However, they felt, as photographers, that there were, in fact, seven species of animal they were most interested in seeking out and recording on film. The addition of the increasingly rare cheetah, with its blinding speed and natural elegance, and the exciting, ruthless wild dog with its complex social society and relentless hunting style, has created The Big Seven. Within these pages they hope to have captured not only the lives of these animals, but also the thrill of their adventures over years in the company of Africa’s most charismatic and fascinating animals. The text and photographs aim to take you on a journey, and make you feel as if you are present, rather than just to showcase images: to feel the dappled light of the riverine forest as a lithe, spotted cat slinks by your vehicle, or to feel the thunder of hooves and the smell of dust as a herd of buffalo take flight from a pride of hunting lions.

Shot over 15 years throughout Africa’s big game areas, The Big Seven is a collection of these authors’ best and most exciting work, and an insight into some of the adventures and close calls they had while producing this book.

The draw has taken place and the winner notified - Congratulations to Clifford Robertson!

Gerald Hinde was born in South Africa into a family that had a passion for wildlife and busi­ness. He was educated at King Edward VII School in Johannes­burg where he matriculated.

After nearly 30 years as the managing director of a large fami­ly motor business, Gerald shed his busi­ness cares in 1989 and took up his hobby, and first love, as a new career. As a highly-skilled wild­life photographer he had pro­duced his first book while still part of the family business in 1989. Over the years he has produced numerous wildlife books and docu­mentaries, many of which received awards. Widely published in maga­zines, calendars and other publications, he has also won a string of awards in photographic competitions.

Will Taylor was born in Zim­babwe, and grew up with an in­tense love of nature and its con­ser­vation, earning advanced degrees in both zoology and bo­tany from the University of Natal in Pieter­maritz­burg, and was awar­ded the prestigious Beit Fellow­­ship for his Masters studies. He went on to become a wildlife bio­lo­gist and Senior Ranger of the MalaMala Game Reserve in South Africa. In this capa­city he guided many lumi­na­ries on safari including Margaret Thatcher and F.W. De Klerk along with other world leaders and celebrities.

Gerald and Will have co-authored four African wildlife books, produced 20 wildlife documentaries that have been broadcast in over 40 countries, and have had their photographs exhibited and published worldwide. They both hope to continue their adventures in bringing images of Africa’s wildlife, landscapes and people to the world, and to continue to champion the issues involved in the conservation of the continent’s wild places. 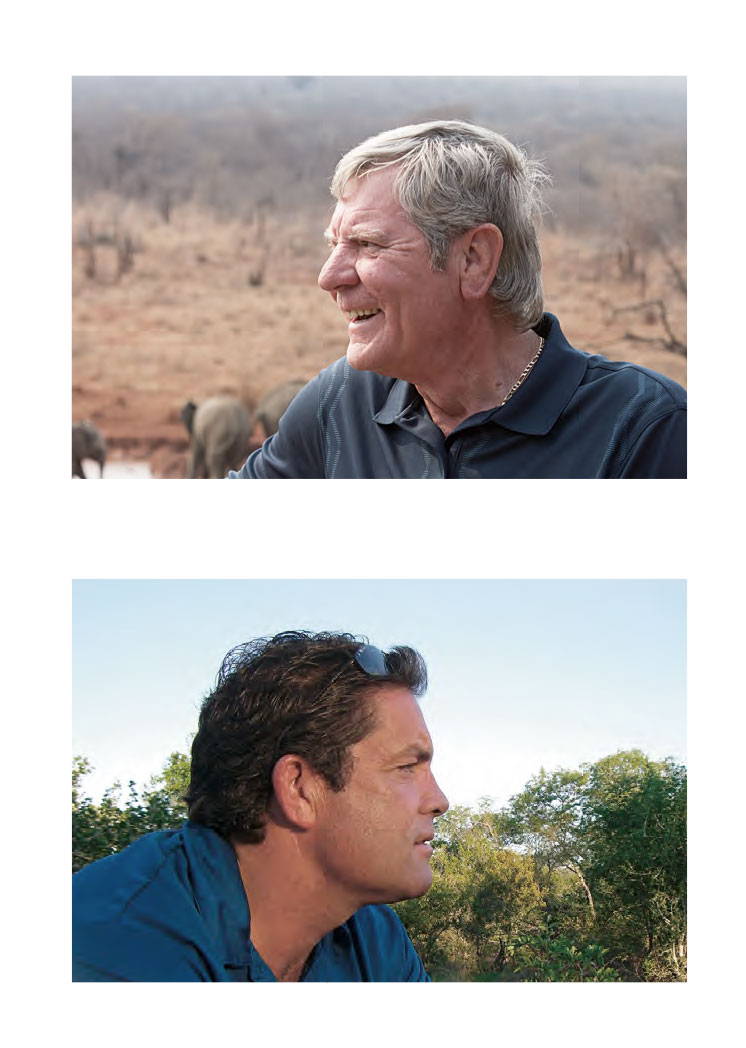 ORDER NOW AND STAND A CHANCE TO WIN
x